Explanatory notes on the pricelist:

Some of you might think that one or the other price of my list is rather high. But is it really when you take into account the facts explained above? The period of the German Reich from 1924 to 1945 is after all one of the most stable German collecting areas of all, and this as far as prices as well as the demand are concerned.
For comparison: Generally speaking, the price level of post-war areas, as far as corner stamps are concerned, is close to or slightly above MICHEL prices; early standard issues from 1948 to 1956 occasionally reach multiple MICHEL prices.

I am well aware of the fact that my price level is partly a bit higher than what many collectors were used or ready to pay in their former purchases or special occasion bargains. Presumably these purchases went according to the following pattern:

No matter if it was an exchange fair, a club meeting, a flee market, at the “dealer’s around the corner”, offers “by approval” or auctions (and today these also include eBay!): you check the stock books resp. the gallery of such offers, by chance you detect a few corner stamps (in the ideal case these should be of the highest possible quality!), and then they must be just "a little more expensive" than loose pieces without margin. Over the years, and with some luck, you might succeed in building up a nice little collection.

Whoever tries to find a specific issue in this way, let’s say the Olympic set of 1936 (MICHEL no. 609/16) from the upper left corner, knows that quite often it takes years until you come across what you are looking for (unfortunately two values of the set are slightly hinged, and one value has a crease in the margin. Really bad luck!)!

That means frustration and nothing but frustration for anyone aiming at high quality!
The question that arises here and that anyone has to face is: Is this the basis on which you have a chance of ever really progressing, leave alone of dreaming to form a remarkable and aesthetic collection according to a pre-established plan?

The collector waiting for “bargains” who is not willing to allow a worth-while premium for corner stamps in either luxury or 1b quality is certainly better off to keep waiting for “occasions” and happy coincidences to see his collection grow. This offer is aiming at the specialised corner stamp collector who for the first time wants to replace the coincidence by planned collecting because he can rely on a well-sorted stock of high quality, and who appreciates sustainable delivery from the expert!

It does not need much intellect to understand that prices of incidental purchases cannot be compared to those of a dealer building up, purposely and with much knowledge, a sustainable high-quality stock.

Since almost all offered corner stamp items of my list are unfolded resp. not partly torn, in their majority without manuscript marks and without hinge even in their margins, such a stock is simply impossible to provide on the basis of “bargain” prices for the reasons explained above!

As a basic principle, you may trust that all stamps and margins offered there are in perfect condition as much as this is possible depending on the production method. Quite a few items, particularly those of high value, have been signed on the back, or they are accompanied by a certificate or an expert’s report (cf. the abbreviations for the kind of expertise).< Neues Textfeld >> 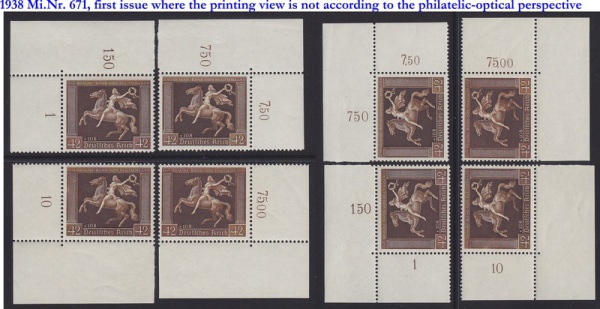 Personally, I would prefer the printing view which means that the stamps would be presented in a vertical position, but that would allow a uniform presentation concerning the margin imprints and the position of the column counters and form numbers etc. throughout a collection.

However, I have ceded to the wide-spread habit of collectors who cling to the philatelic-optical view which has also been adopted by the MICHEL catalogue in its designation of fields in a sheet of stamps! Those stamps which fall into this category have been made discernible by an underlined MICHEL number!
The only exceptions are the following five issues:
804/5, 820/22, 823/25, 855/56 u. 866/68.
Since these series are composed of stamps of different formats, they have been arranged according to printing principles to allow a better optic view!! On special request, however, I can also in most cases furnish these stamps following the philatelic-optical perspective!

Next to the MICHEL number, you also find the face value of the stamp mentioned; experience has taught me that this makes it easier to locate a certain stamp, particularly those being part of a series. Next comes the price for corner stamps in the following order:  top left, top right, bottom left and bottom right. These prices are not always homogeneous in relation to the new MICHEL corner stamp quotations, but sometimes they depend on the relative availability and on the stock! An additional column is reserved for annotations for stamps marked with an asterisk *.

Please note:
Minimum price per corner stamp € 2,50!
This takes into account the so-called ‘handling‘, because even fairly inexpensive and simple-looking corner stamps in perfect condition are not found en masse!!


The following abbreviations were used:

Important notice: A separate price list is being prepared for so-called 1b quality.

It contains correct stamps the margins of which are either hinged (resp. with trace of hinge), folded (resp. slightly folded), partly torn or bearing strong manuscript marks, but optically they are still absolutely collectible!

Furthermore an album containing a moderate offer of used corner pieces is available. It will be at your disposal in the near future in form of a CD picture gallery.

Do you have any questions? Please get in touch with me by mail or my contact form.