On the Collecting Area 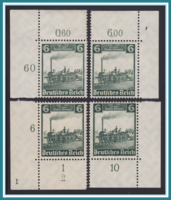 Whoever has seen album pages where the stamps from all four sheet corners were arranged as “blocks of four”, will without resistance succumb to their fascination and charm, and even more so in the awareness that

(Almost) Nobody else has anything similar!

Post-war collecting areas like the Federal Republic of Germany, Berlin and to a certain degree also the GDR, are cultivated by a small group of specialised dealers who hold stocks for these fields – I am one of them as far as Berlin 1948/54 is concerned, and over recent years a relatively stable circle of collectors has established itself for this specialty, facing alas a very reduced number of capable providers.

For the German Reich there are interested collectors as well, but as far as I know there is no provider yet! The following reason can help to explain this phenomenon:

The problem of getting appropriate material: The fact that before and during the war stamps were mostly preserved hinged in albums and were or could only be collected as such, in addition to the fact that much was lost in the turmoil of the war, explains that only a considerably smaller part of the original total number of stamps has been preserved mint.
Consequently, sheet corner stamps will make up an even much smaller percentage, all the more so since the fashion of collecting corner stamps was much less practiced in former times than it is today. To make things worse, of the few extent pieces many are stuck directly into the albums with their margins folded, and in the worst of cases the margins were even torn off (even dealers used to tear off the margins since they encumbered the thickly stuck stock books!), so that the number of pieces faultless even in their margins is once again considerably reduced.

Well, all that remains to be said now is: Good luck in the search of your missing sets and individual stamps, and above all: ENJOY!

Do you have any questions? Please get in touch with me by mail or my contact form.